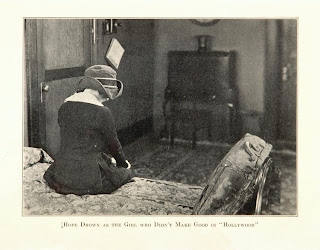 1256...
+
Edited Archangel from "Cowboys of Verst 38" to meeting Aarne in "Hugo's Fairy Tale."
Smoothing things, feels right. Fearful of what the next two days will bring, as they requires I actually be good. I am more comfortable with striving toward adequacy.

The photograph above is of Miss Hope Drown, from the 1923 film Hollywood. The plot was diabolical: she comes to California with big dreams of acting. Her whole family follows. And one by one, everyone from her grandpa to her baby brother, they all become famous movie stars. But she can't get a lick of work. Not one. The movie costarred everyone. Chaplin, Fairbanks, Arbuckle, Gloria Swanson, Mary Astor, Anna Q. Nilssen, Agnes Ayers, William Boyd, Viola Dana, Pola Negri, the Demilles, every Pickford within a 100 mile radius...everyone. And it was a success, and then it was forgotten and then every single copy of it (nitrate) went to dust. Contemporary reviews were both positive and cruel, in that they praised the film but didn't want to give anything away. "We'll not explain what marvelous ad libs Mister Chaplin performs at the train station," and so forth. It was a bit about ecclesiastical Buddhism by the end. So this is a photo of Hope Drown sitting on her bed, back to us, awaiting the break that would never come.

Oh, by the way: Hope Drown? That was her real name. Graduated from Beverly High in 1919. Worked on the year book. And after "Hollywood," the film? Never worked on another movie again.
Posted by Glen David Gold at 12:52 AM